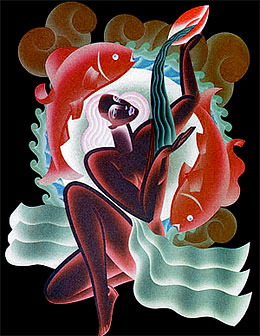 The Greek astronomer Hipparchus observed in 128 B.C. a slight difference between the solar year (the time it takes the earth to revolve around the sun) and the stellar or sidereal year (the time it takes the sun to realign with the stars). As a result, year to year, the path of the sun and the spots where it rises and sets will change with respect to the backdrop of the stars.

This phenomenon, called precession, is caused by the gradual shift of the earth’s axis of rotation. In practice, it means that the position of the sun at equinoxes and solstices, which mark the seasons, slowly changes with respect to the constellations of the zodiac.

An astrological age is a time period which astrology postulates parallel major changes in the development of Earth’s inhabitants, particularly relating to culture, society and politics. An Age is one twelfth of a 25,800-year astronomical cycle determined by the precession of the equinox. (2160 years = 1/12 of 25,800 years) Therefore each astrological age lasts approximately 2,150 years.

We are currently in the Age of Pisces, transitioning into the Age of Aquarius. Just like the aura of a person, each age has its own energy signature along with an accompanying theme or lesson, and when we look at them in reverse across the millennia, they are easy to determine.

Astrological ages proceed in the opposite direction (“retrograde” in astronomy). Therefore, the Age of Aquarius follows the Age of Pisces. These Ages are not part of astronomy. They are simply an astrological age which occurs because of this real motion of Earth which we know as the precession of the equinoxes, which for example, causes the identity of the pole star to change over time.

The precession of the equinoxes takes approximately 25,800 years to complete one full cycle through the signs as we’ve said, and there are 12 constellations of the Zodiac; so, roughly every 2,150 years the sun’s position at the time of the March, or vernal, equinox moves in front of a new Zodiac constellation.

World Ages and the Astrological Signs

When Moses brought back the commandments from god, his people were worshipping a golden calf, or in zodiac terms, the Age of Taurus, around 4320 to 2160 BC. Taurus rules money and wealth, monumental building, permanence, solidity. The next is the Age of Aries, from 2160 to 0 BC and it rules war and fighting, challenge, individuality, and independence. Aries marks an important shift in world consciousness.

The older matriarchal ideal of Taurus monumental solidarity, where everyone had his or her defined place in society, was the antithesis of the incoming Arian ideal of individualism. Aries is ruled by Mars, the god of war, and it was Rome’s military innovations that allowed it to conquer lands on three continents. This age was one of continual fighting. The Biblical Old Testament is an Aries tale, first written down around the 7th century BC, well into the Age of Aries. The Age of Aries was ending just as the Roman Empire had extended to its farthest reaches.

The Age of Pisces followed, symbolised by the twin fish. It was an age of the emergence of the great world religions. The years before, as early as 700 BC, were the transition point into the Age of Pisces. Both Jesus and the fish represent the next 2,150 years in Christian theology. Jesus message was of peace, compassion, and oneness with God. Jesus represents the birth of non-ego (Pisces, meaning fish) from ego (Aries). Paramahansa Yogananda, the Hindu guru who came to America and whose book, Autobiography of a Yogi, inspired many Westerners to follow Hindu-based teachings, defines Christ Consciousness as “the universal consciousness, oneness with God, manifested by Jesus, Krishna, and other avatars,” and is the realisation of “God immanent in all creation.”

The eras of an age mark a transition point where new energies are felt that lead to new directions that will welcome in the new age. This happens around 700 years before the new age begins. Notice that around 700 BC the Prophetic Revolution began the process of changing a local Semitic religion into the great world religion of the Hebrews. Around 500 BC, Lao Tzu introduced Taoism to China. The Buddha was doing the same thing in India. Hinduism was also undergoing a Pisces shift. The warrior gods such as Agni were demoted while Brahma, Vishnu and Shiva were all elevated in importance as gods of a new transcendent reality beyond the mortal relative world. These were all religions of transcendence.

The Age of Pisces, 0 BC to 2160, rules: transcendence, spirituality, contact with other worlds, all concepts that are the best attributes of Pisces, ad the flip side: fear, prophets and prophecy, dissolution, illusion, lack of direction and blind faith. Pisces comes from the Latin for “fish” and its symbol (called a glyph) is two fish swimming in opposite directions. This represents the dualism of man’s finite consciousness and the infinite consciousness of universe, material man versus spiritual man, the conflict between the ego-self of Aries and the group-oriented Aquarius.

The Age of Aquarius begins when the March equinox point moves out of the constellation Pisces and into the constellation Aquarius. When will that be? There’s no definitive answer. Various interpretations give different answers to this often-asked question. The energy signature of Aquarius is one that promotes Divine Order, truthfulness and all that is in the best interests of humanity.

The Age of Aquarius is said to be around 2160 to 4320, and it’s energies rule: Brotherhood, Utopia, Genius and Science, Immortality, Hopes, Dreams and Wishes, Revolution, Electricity.  700 years prior to Aquarius takes us back to the fifteenth century, and this was the time of our Renaissance. Although we are not in the Age of Aquarius yet, we can see what is happening historically as we approach that age.

The arrival of the Aquarian age has been associated with … well, harmony and understanding, sympathy and trust abounding. And that brings us to the 1967 smash-hit musical Hair, with its opening song Aquarius, by a musical group called the 5th Dimension. It’s hard to describe how Hair, which seems daring even today, affected people when it opened on Broadway in 1968. The song opened with the lines:

When the moon is in the Seventh House

And Jupiter aligns with Mars

Then peace will guide the planets

And love will steer the stars

This is the dawning of the Age of Aquarius