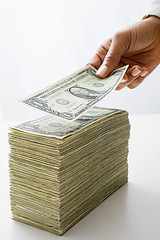 It’s like this. If you had put aside 5 dollars every day, you would only have $1300 saved in your first year if you put it into a bank. But let’s say you keep doing it. You did that for the whole of your working life, you have $65,000 saved in your 50 years of work.

But just imagine that you had invested it – you would have several million dollars, and all you had done is save $5 a day. That’s the Law of Compensation at work in two different ways: in addition and leveraged. The Savvy Team believe that leverage is the best option, whether you are talking about money, about lifestyle, about freedom, about health.

Robert Kiyosaki explains the Law of Compensation like this: Returns are minimal in spite of massive effort at the start, yet returns can be massive with minimal effort over time. I’ll use two of my personal examples to further illustrate the importance of this Law to you.

The first example of the Law of Compensation is health. It was easy being healthy when I was young. I was full of energy, so life and physical challenges were fun. Growing up, I was always a bit anemic and found I got tired very easily. Moving to New Guinea after college, I began eating good clean fresh foods, swimming in the pristine oceans around Madang, and my health gradually picked up. For the next five years I travelled the world, ate what I wanted, was as thin as a rake and lived the life I desired. No obstacle was too big to undertake emotionally 0r mentally and I enjoyed as much physical activity as I could fit into my day. So what changed?

Eventually I returned to Australia, got work, fell in love and got married, and began having children. At the time I had no idea of the importance of nutrition on health. I did not even consider I could be deficient of minerals, or that my teenage anemia could return. As the years went by, the spring left my step, I hardly had energy enough to care for the family and exercise was out of the question, even walking became a burden.

Over the years I attempted to eat well. I made sure I put at least three to five vegetables on the dinner plate each evening, I used very little sugar, but just did not understand that the nutrients were not in the food, especially in adequate quantities for someone having a child every two years. Gradually my ‘time out’ activity became more and more sedentary, reading and watching TV became easier than staying active.

By the time I was 55 I’d put on 10 kilos of fat and probably lost another 10 due to a lack of physical activity – which means I was possibly 20 kgs overweight. Muscle weighs more than fat, and this oversight has many people not realise just how overweight they are. During all those years, I would make a resolution to get healthy, and begin walking, or working out and watching what I ate. By the following week, however, I’d lost no weight, and I was hungry and lacked energy all the time—so I quit because I’d put in a lot of effort for very little return.

Finally, after realizing I needed help, I hired a coach, a person trainer to get through the initial period of maximum effort and minimal returns. Even after two months, the Law of Compensation kicked in. My health and strength began to return and I could exercise less, still gain strength, and eat and drink what I wanted.

Unfortunately, I went on a two-week vacation overseas, which included a weeks luxary cruise with friends and so I began eating and drinking, didn’t exercise and I gained all the weight back.

So what have I done? I started over, once again going through a period of maximum effort for low returns. My weight has gone, but even better, although I am only working out once a week, my muscle tone has returned and I am stronger and fitter than I have been since I was a teenager. And all it took was a few simple daily disciplines which compound over time.

My second example of the Law of Compensation has to do with wealth. In 1975 I married and my husband and I began accumulating real estate, with the goal of early retirement. My husband already had one multi-dwelling rental property, and within months of the wedding we bought our own home, then a year later another dual dwelling.

Our goal was to purchase a property each year to upgrade and keep, and that worked well to begin with. However, along came the children, one after the other, so along with scrimping and saving, I began working from home to enable us to keep putting money aside so we could keep up the momentum. We did this for twelve years, working around several major transfers interstate for work, and five children – riding the ups and downs of the market, and our personal incomes. Despite having to sell a property occasionally we ended up with almost a dozen properties, most of them multi-dwellings.

Along came the stock market crash of the late 1980’s – just after my husband had given up work to spend more time caring for and increasing our real-estate portfolio. I had developed a part-time income around the growing family in network marketing so we weren’t too worried. We were reaping the benefits of following the Law of Compensation.  However over the next four years, interest rates rose beyond anyone’s expectation, and the pinch began to take it’s toll. Life got hard and we stopped doing the things that had us achieve what we had. My network marketing income fell due to my failing belief – and although we lived in a beautiful home it was outside the average persons price-bracket, and we couldn’t sell with the downturn of the market.

I lost faith in myself, my marriage, my networking business and life was a struggle. So one by one the rental properties were sold off – till we were way past broke and I was divorced. Eighteen years work, struggle and effort all gone. But in 1993 I started my first major business working hard for very little return, seven days a week, over twelve hours a day. My business partner and I struggled to regain momentum, but it didn’t really get off the ground and the business sold for what we put into it, eighteen months later. We were lucky. That business changed hands seven times in the next seven years, before the area recovered.

Almost a decade after the stock market crash, and several years after my failed restaurant, my  friend Corey and I launched our Neways enterprise in 1997, and for the next two or three years Corey and I worked on building our network, applying the principles of delayed gratification (which exemplifies the Law of Compensation). Working around our other businesses and full time work, we each did daily disciplines on our part-time enterprise, and gradually saw the income grow: $200 the first month, $1000 the third and forth month, $2000 within a year . . .

We began to put serious effort into building the network, training the team and promoting the opportunity – around everything else that our life contained – family, work etc. In 2000, I retired financially free at the age of 49. I had given up my other business pursuits to focus on the network and went to Uni to get a degree in Theology, a long time passion of mine. Whilst working the networking business part time, Corey gradually extracted himself from his business interests, walked away from his part time cleaning company early and retired from the employee ‘rat race’, where he managed a restaurant before the age of 30 … and the rest is history.

The Law of Compensation Always Works

Today, when it comes to health, I’m paying the price for disobeying the Law of Compensation for all those years. I’m glad I caught myself at 10 kilos rather than 20, 30, 0r 40 though. But my recovery of the fitness and tone I desire still takes daily discipline and effort.

When it comes to wealth, I am reaping the benefits of following the Law of Compensation. Today, with very little effort and lots of love and passion, my returns on my very few years investment of time, energy and money are phenomenal—even over the current bad economy. The investments of time, money and energy, when compared to that required for my restaurant, is almost laughable.

For instance I worked 96 hours a week in my restaurant – for NO personal INCOME for the first 12 months; I was drained, tired and exhausted, and worked those hours as a single mum when my five children were teenagers; and while I was fortunate to get a financial backer who was willing to accept interest only payments initially, the investment of money into ones network marketing business is more like a hobby investment than a real business. But the compounding effect pays off!

The monthly requirement of personal volume came from my changing brands to safer, non-toxic products and looking after my health with nutrition. Without spending any more money on a weekly basis on my shopping, I have improved my health and the health of thousands of other people, most of whom I have never met.

With a lot of people doing a little bit, with a few people changing their shopping habits and teaching others to do the same, large volumes can begin to develop. That’s Kiyosaki’s Law of Compensation in action: Returns are minimal in spite of massive effort at the start, yet returns can be massive with minimal effort over time.

I write this article for those of you who are struggling with success.

Press on even though you may think your returns on your time, money or energy investments are small. If you quit, like I did with my health program, you’ll have to go through the same crummy period of maximum effort with minimal gains again.  As Robert says: “Remember that winners never quit. Success is not a stop sign. Obey the Law of Compensation.”