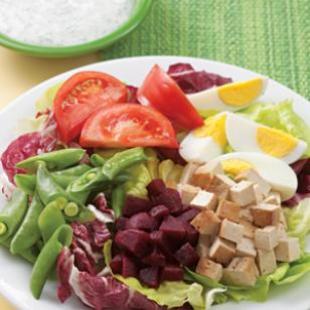 We all know that weight gain is an increasingly disturbing problem in the western world. Have you ever wondered why this may be? If you were to read anything about diet prior to 1977, the dietary recommendation would be simple … eat three meals daily, period.  Eating between meals was considered either rude or glutinous.  Or it was a sign that the prior meal was inadequate.  It is only over the last 35 years or so, and predominantly in America, that eating between meals is socially tolerated.  And as far as we can ascertain, this experiment is having the expected result, we are getting bigger and lead the world in non-infectious gastrointestinal illness.

What happens when you eat simple carbohydrate foods at or between meals every day?  You get hungry in between!

What happens when you only eat low-fat foods, and only at meals three times per day?  You get hungry in between!

So where did the recommendations for eating 4-5 meals per day come from?  Back in the 1970’s a number of studies were looking at populations of people and tried to come up with conclusions about what might be contributing to the growing number of chronic diseases that the western world experienced after World War II.

By 1977, the US Senate produced a publication, Dietary Goals for the United States, which recommended moderation in the following four theoretical culprits: sugar, salt, alcohol and fats. PLUS, at the same time they supported very large intakes of grains and high carbohydrate foods, all of which are now heavily intrenched in the western diet, causing over the next few decades a myriad of health problems that continue to increase both in severity and numbers.

In retrospect, the smoking (of unfiltered cigarettes no less) that was prolific after World War II was probably the biggest culprit, trumping any dietary factor.  Nonetheless, fats in the diet from here on have been the fall guy in the diet. Plus the suggestd increase in carbohydrates has only added fuel to the ‘weight-gain’ fire. When over the decade Americans began getting exposed to the relatively new forms of staple foods: skimmed milk products, skinless chicken, low-fat alternatives to traditional foods like crackers and mayonnaise, and the several aisles of breads and carbohydrate ‘belly-fillers’ may have helped to keep the food bills down, but they have added to growing waist-lines and to many degenerative diseases.

So let’s look at this major dietary issue.

Fat has the following three effects that allow “three-squares” to be enough:

Knowing what we know now from the three effects above, let’s predict what happens when one reduces their dietary fats.

Oh, and if you still think all fats are bad for you — and that they make you fat — read Gary Taubes’s book, Why We Get Fat.

What happens when you eat the wrong sort of carbohydrates?

Many people cut back on carbs as a method of losing weight. Unfortunately, mounting research shows that the dangers of high carb diets can go way beyond weight problems. Your body actually needs carbs to extract glucose for its basic needs. However, the problems begin when we eat excessive amounts of carbs — especially the wrong kinds of carbs. Eating too many simple carbohydrates can inspire blood sugar spikes, which have been implicated in a number of age-related chronic diseases. For this reason, you should strive to incorporate complex carbs into your diet and minimize simple carbs whenever possible.

How does the average person living in, say, Japan stay leaner and healthier than the average American while still consuming >70% of their caloric intake in the form of carbohydrates? We don’t claim to know the answer this question, but we’ve got a few ideas. Virtually any diet that reduces caloric intake also reduces glycemic load. That is, cutting calories almost always means cutting carbohydrates, cutting insulin, and cutting fat storage. So what does this have to do with folks in Japan eating rice? While these cultures may consume a higher percentage of their intake from carbohydrates, their actual glycemic load is lower. In other words, they actually consume fewer total carbohydrates in most cases than a typical Westerner (and in the presence of much less sugar!).

According to the Mayo Clinic any physical activity you do requires carbohydrates to provide you with fuel. For most recreational activity, your body uses its existing energy stores for fuel. But when you engage in long, intense athletic events, your body needs extra energy to keep going. The purpose of carbohydrate loading is to give you the energy to complete an endurance event with less fatigue, improving your athletic performance. Carbohydrate loading is most beneficial if you’re an endurance athlete — such as a marathon runner, swimmer or cyclist — preparing for an event that will last 90 minutes or more. Other athletes generally don’t need carbohydrate loading. It’s enough to eat a diet that derives half or more of its calories from carbohydrates.

Be Sure to Pick the Right Carbs

The Mayo Clinic advises to be careful if undertaking a carbohydrate-loading diet. It can cause some discomfort or side effects, such as:

Carbohydrate loading isn’t right for every endurance athlete. It’s a good idea to consult your doctor or a registered dietitian before you start carbohydrate loading, especially if you have diabetes. The best way to avoid the dangers of high carb diets is by avoiding simple carbs as much as possible. Common offenders include white bread, white pasta, white rice, and potatoes. When in doubt, avoid white, starchy foods. Instead, pick complex carbs, like veggies and beans. Their fibre content helps delay your gastric emptying time, minimising the impact the food will have on your blood sugar levels.

The UNM School of Medicine offers this dietary advice: As examples, a typical meal might include some type of meat with green vegetables cooked with a mayonnaise sauce or a lot of butter. Heavy cream may be included on the side for drinking. Another meal might consist of bacon and eggs with a lot of butter or oil added, and heavy cream to drink. A very high ratio of fats to carbohydrates must be maintained with a low total calorie intake for the diet to be successful.

So, to sum it up in the fewest number of words possible, know that:

Put Down Your Fork After Each Bite:  Mom was right when she told you to slow down. People who eat quickly are three times more likely to be overweight than those who eat at a moderate pace, says a new study of more than 3,000 people. When you eat fast you tend to overdo it because your brain doesn’t have a chance to realize you’re full. Try these tricks to pace yourself, says wellness coach Deborah Enos, CN, author of Weight a Minute! Chew, swallow, then pause to take a drink of water or a deep breath before picking it up again.

Step Away From the Table: While dining out, go ahead and have a (one) piece of bread if you must. But after you’re finished, get up and go to the bathroom (even if you don’t have to). Take 5 deep breaths before returning to the meal. Don’t bring bread into your home, unless you have growing children, and then limit the type and amount you give them. Find healthy alternatives to sandwiches for their school lunch. You are not doing them any favours, and could be setting them up for long-term digestive complaints in the future.

Heat Things Up: Have some piping-hot soup or tea with your meal. You’ll automatically eat more slowly than when you choose cold food and drinks. And when you take a portion of refrigerated meat out and want to keep away the rest for later, then wrap it with the edible animal casings from www.dcwcasing.com/ to keep it fresh.

The Balancing Act: Most women runners have faced the problem of caring for a home and family, going to work and still finding time to run. The most important thing is to involve your family and children. Make them see how much the sport means to you. You will find that this approach gets you a huge amount of support. Organize your household chores so that you can manage to stick to your schedule as much as possible. However, do not feel guilty if you have to miss a day or two. In addition, arrange your running schedule around your office hours. You can even go for your run directly from your workplace.

Exercise: Running is the best form of exercise for women to lose weight. Research shows that spending 30 minutes a day, for four days a week, leads to a high level of fitness and satisfactory weight loss. Apart from being a weight-loss measure in itself, running is also an excellent component of any weight control programme. However, experts suggest that you before you start on a running program in order to lose weight, it is important you calculate your BMR (Basic Metabolic Rate) and devise a program accordingly.

Please give us your feedback or contact us for more information.