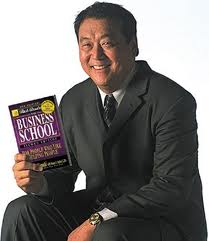 Entrepreneur Robert Kiyosaki is the author of the best selling business books of all time, the “Rich Dad, Poor Dad” series, and he is alway talking about cash-flow and diversifying your income. If you are looking for a way of diversifying your income, this is the time to look into what the Savvy Team are about . . . it could prove profitable for you.

Kiyosaki’s message in all of his books is the same: “Take responsibility for your finances – or get used to taking orders for the rest of your life. You’re either a master of money or a slave to it. Your choice.” He wrote a book called The Business School For People Who Like Helping Other People, which gives you reasons why what we do is your wisest choice, if you want to develop wealth today. In his most recent book “The Business Of  The 21st Century” Robert Kiyosaki describes one business model he believes holds the greatest promise for building genuine wealth for the most number of people.

That business is called network marketing.

David Frost has made millions as an entrepreneur, opening, running and selling six businesses prior to becoming a professor at Bethany College in Kansas in 2006 and found himself ion network marketing.  The main goal was to help his students create businesses that could follow them after they graduated, minimising their student-debt ratios while giving them a fighting, post-education chance at success.

“We had three criteria,” explains Professor Frost. “It had to be a business they could take with them, which meant it had to be an ecommerce business. It also had to have the earning potential of at least $50,000 a year and it also had to have little or no financial risk for them.” Let me list them again, so you don’t miss these great benefits of network marketing:

After six months of research, the only business model Professor Frost could find that met all three criteria was the network marketing business model, so despite his misgivings he investigated further, and eventually developed a course for his students to learn the ropes, no matter what company they were in. Here are some other benefits Frost points out.

“In order to succeed in business, you have to hire hard working, smart people. The problem with keeping top employees in the traditional business model is that it forms a pyramid that only has room at the top for the owner/CEO. This caused many of my key employees (who wanted to make more money) to leave me and eventually compete with me, when I was in business for myself” he explains.

“In the network marketing model, they stay because they have the opportunity to make more than the person who is above them or who brought them in,” he adds. “It’s a win-win for all involved. Traditional companies are true pyramids. The network marketing model allows for healthy competition. People on my team can be more successful than me, make more money than me, and we can still work as a team. I find this inverted pyramid model gives everyone an equal chance at success.” Frost says they’re learning life skills that can only be taught through experience, not just through college textbooks and lectures.

“My goal is to help people understand how the network marketing business model can actually help those around you, such as friends and family, if done correctly,” he shares. “Unfortunately, I found that (sort of attitude) not to be the case when I was running many of my traditional businesses in the past.”