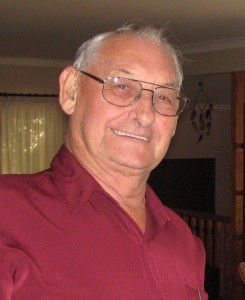 Back in 1992, (15 years before) Ted had broken his back resulting in continual pain, which meant he took strong prescription drugs to deal with the pain.  Only a year after using the savvy strategies for wellness, (by the end of 2008), these painkillers were no longer required, no doubt a benefit of his savvier health regime and the other supporting substances Ted learned about through his support team.

A year after the diagnosis of prostate cancer, the doctors had suggested Ted begin on strong medication and a Zoladex slow-release implant, which lasts for three months. When Alan first met Ted (2007), he was well into the second implant, at about 18 months after the original diognosis.  It seems that this type of approach, using a female hormone estrogen, at best will only keep the cancer at bay whilst creating side effects which included:  fluid retention, swelling of legs, ankles and even heart failure!

Prostate cancer is probably the most common of all diseases in men today. Having seen the dangers of radiation and chemotherapy, Ted asked his doctors to look for another way to deal with this, because in addition to wanting to avoid the issues resulting from their usual ‘solutions’, he needed to continue working; which he would not have been able to following their recommendations.

Ted was informed some time later, that the three tumours were now in fact, four and that there was also a growth in the stomach.  Months later, they revealed that the number of tumours had actually increased to nine, not four!

There was no time to lose so Ted immediately began to address some of the issues .. with a program Alan had pointed out.

Great news – after only one month, his PSA level dropped to 14 – still far too high but it was obvious that what he was doing was working. Greatly encouraged, Ted was willing to add other recommendations to his current regime. At this time, Ted said “this is the best I have felt in 30 years” – that’s half his lifetime!  He and his savvy support team were very happy, and following their recommendations over time he gradually introduced a safer range of household products, to help reduce his toxic chemical load.

By Christmas 2007, the doctors reported that all tumours in the prostate had disappeared and that his PSA level was down to 1.

Early in 2009, he was pleasantly surprised again to learn the PSA dropped even further to .5, just 18 months after finding out about these savvy strategies! He had been trying the health products now for the same amount of time that he had originally been under medical treatment (over which time he had only seen an increase in his tumours) no wonder Ted was excited.

Prior to Christmas 2009, Ted’s doctors’ had concerns regarding the growth in his stomach, and they queried the necessity of the Zoladex implant in that area.  He had been booked in for a test and possible surgery in a month.  With no time to lose, he thought it was a good time to implement one of the Savvy Team’s favourite sayings about “doubling up” with the nutritionals. Nobody was more delighted than his new friends, when they received the following email from their friend Ted, at Christmas 2010.

“Dear Alan and Alice
Thought I had better send you an email – could not get a reply on the phone.
The good news is what I have felt for some time is that all of the growths have completely disappeared, so as a trial period I am off the injection for four months at the moment.
So I intend to work on it so I do not have to go back on it and also to bring my weight down.  This is one of the things that I talked to the doctor about, and with the growths gone, she had agreed to it and she said for me to keep doing what I have been doing.  I think she was quite impressed with the speed that they disappeared.  In fact, I do not think that she could believe her eyes.
Have a nice Christmas and New Year.”

On April 2010, Ted reported a PSA reading of .005 … Contrary to the doctor’s belief that removing the Zoladex would result in weight gain, Ted also managed to lose some weight as he continued on the products.

So, if you chose to have the right attitude, faith and use enough of the right products on a daily basis, what could you achieve? For more information on what products Ted had benefit from, please don’t hesitate to contact the person who sent you to this site, or to find out more about Ted email [email protected]