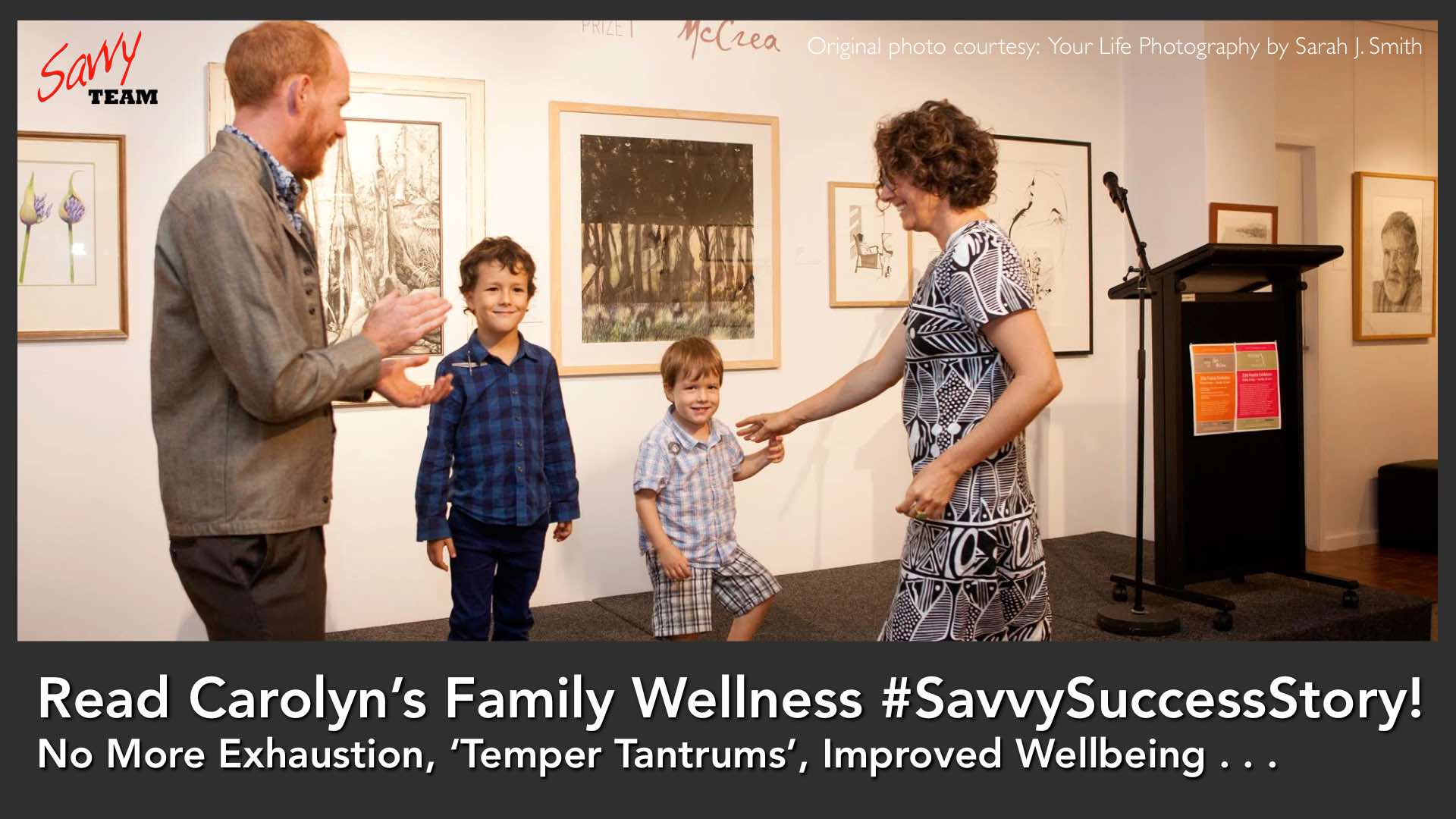 Saturday Success Story: Carolyn shares the impact that ‘Being Savvy’ made for her family’s wellbeing!

After my first son Morris was born, he and I were quite unwell.

He had early surgery and wasn’t sleeping for more than two hours at a stretch – before or after. Obviously, we were both exhausted! At eleven months we stopped giving him wheat, dairy and breastmilk. His sleeping began to settle, but we were still not in a good way.

I spoke to a number of different practitioners and therapists (GP, naturopath, osteopath, Tresillian, cranial sacral therapist, a controlled crying person, all sorts of practitioners) to seek help.

“Nothing seemed to work. In fact we were both so exhausted that I was unable to make anything work.”

It was time to take different course of action . . .

I can’t recall at what point in all this – but I eventually called Linda from the Savvy Team and said I have seen everyone and nothing is working can I have time with you to discuss what’s possible. Linda and I planned monthly assessments for three months.  She put me on the second phase on their standard cleanse with nutrient saturation.

“It took just three months to feel ‘human’ again – and we have never looked back!”

I now take the Savvy Team recommended multivitamin, antioxidant and trace-mineral drink a few times a week. And when I am feeling ‘stretched’ – I take the green superfoods, probiotic/prebiotic combo, a Chinese wellbeing formula, or immune support herbs like Maitake mushroom depending on my needs.

Since that time my boys, now aged 3 and 7, have always taken the children’s multivitamin and trace-mineral drink a few times a week and occasionally have other things such as antioxidants and/or Bovine colostrum formula when they are sick, or a pro-biotic when they are run down or need some extra digestive support. We also keep essential oils in the house for frequent use in numerous ways.

We eat very well, (along the lines of the ‘Eat Savvy‘ diet), we have a relatively simple life and the boys are generally easy going. They have been with a number of different day carers over time and each have commented that they are unusually easy (e.g. well behaved, thoughtful and engaged). They are exposed to very little harmful household chemicals, as we have changed to the safer recommendations from the Savvy Team.

The right supplementation can make a BIG difference! Here’s how I know . . .

We don’t vaccinate and so recently went to see a GP with an nutritional health perspective to find out about the changes to the immunization regulations and see if our family history of gluten and dairy intolerance, leaky gut and depression, made us eligible for exemption. We were not eligible – but the doctor suggested a number of tests. To do the tests we needed to go off our nutrition for 3 days.

In the business of life – the 3 days turned into a month before the tests have been ordered, delivered and I made time to have them done. By the end of the month off the nutrition, my previously ‘zen’ children were now ‘wild’. It was like they were not ours! The eldest was having daily melt-downs and the younger one astounding screaming fits and had taken to biting his brother.

One evening we were on the beach when a screaming fit ensued.  The three year old was beside himself he had just bitten his brother and been scolded. It was all I could do to hold him while he kicked and screamed at the top of his lungs. This had become scarily normal and I was wondering how on earth we were going to manage.

In light bulb moment I asked whether he was having terrible trouble controlling his behavior. He answered “Yes”. He was trying to be good but was angry all the time.  I asked if it would be good if we got the tests done the next day so that we could start eating ‘pink tablets’ (the children’s multivitamin) again. He said yes and broke down into deep sobs. We did and within a week we had our zen children back!

My Advice to Others

Listen to the Savvy Team’s recommendations!

It took me 10 years to follow the advice from Linda and the Savvy Team and change our household to all safer products. And a crisis to seriously consider the importance of regular nutritional supplementation.

Don’t let it take that long for you.