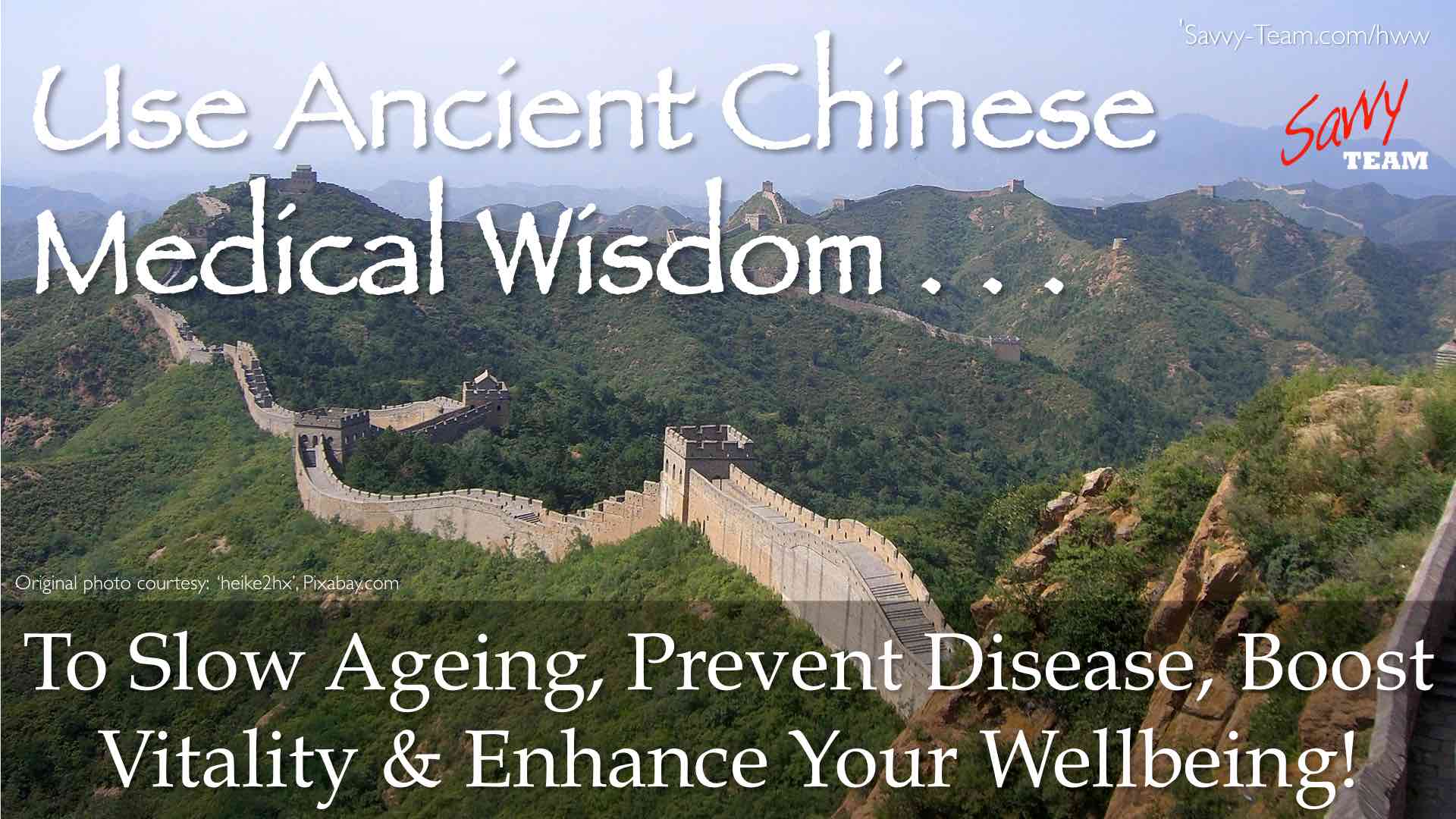 Boost Your Vitality, Slow Ageing & Prevent Disease with these 5 Herbs that Date Back Centuries!

The Chinese believe health is a combination of body, mind and soul – and that good health is achieved by balancing all three systems. Oriental teachings address even complex psychological dimensions through this philosophy of “wholeness.” Balance in the body is vitally important and each organ must balance with interrelated organs to create positive energy in the entire body.

For over two millennia, physicians of China’s Imperial Court researched the effects of various herbs on the human body. Meticulous record-keepers, these physicians kept complete, accurately written logs so that those who came after them could build upon their research. They were eventually catalogued under the watchful eye of court physician Li Shi Zhen and under direct orders from Emperor Ming Cheng Zu during the Ming Dynasty, the most magnificent period of cultural renaissance in Oriental history, which ruled China for nearly 300 years.

The thousands of Imperial herbal prescriptions were some of the most prized possessions of the royal family and their extensive medical library of pharmacopoeia were used for Ming Dynasty emperors and their families to improve health and wellbeing and to assist with longevity. The anti-ageing properties of many of these herbs are well known – and many of these royal formulas are still available today.

Many herbal formulations used today, draw upon the philosophy of this ancient Chinese medical knowledge and use combinations of ingredients taken from this ancient pharmacopoeia. Part of this philosophy states that the body’s life force or ‘Qi’ (pronounced and often written as ‘chi’), is composed of energy that flows through the body’s internal pathways. As the imperial physicians found 2000 years ago, there are specifically selected herbs proven today to have an invigorating effect on Qi.

This can be extremely beneficial as the levels of chi in adults do decrease over time and this loss is exacerbated when we suffer from the effects of environmental factors which can cause energy imbalances in the body. So to support the optimal performance of your body’s bio-systems; to improve your health and support your anti-ageing efforts; including some special Chinese herbal nutrients that fuel and strengthen the entire body – seems like a wise idea!

Here are just some of Emperor Ming Cheng Zu’s favourite herbs that were used for health, wellness, anti-ageing and longevity.

Astragalus is one of the 50 fundamental herbs used used as a “Qi tonifier” in the orient and in traditional Chinese medicine. Native to the temperate regions in the Northern hemisphere, it’s known as Huang Qi and common names include milk vetch, locoweed and goat’s thorn. A recent blog I read (September 28, 2018) listed the Top 23 Scientific Health Benefits of Astragalus

Astragalus has been used for centuries for seasonal allergies, heart failure, diabetes and to strengthen and regulate the immune system and many other conditions. Some people use astragalus as a general tonic, to protect the liver, and to fight bacteria and viruses.

It’s used in traditional Chinese medicine for healing and for diabetes. It has been asserted to be a tonic that can improve the functioning of the lungs, adrenal glands and the gastrointestinal tract, increase metabolism and sweating, promote healing, and reduce fatigue.

Practitioners of Ayurvedic medicine recommend ashwagandha as a prized adrenal boost. Ashwagandha is an ancient Indian herb with a history of therapeutic uses. Known as a tonic for all kinds of weaknesses, ashwagandha is famous for its direct benefits for the adrenal tissue and function of the adrenal glands. It can normalize adrenal gland hormones. Ashwagandha promotes strength and vigor while also regarded as a rejuvenator and mild aphrodisiac. Ayruvedic physicians use ashwagandha as the treatment of choice in rheumatic pains, inflammation of joints and other related conditions. Ashwagandha is considered to be an adaptogen, a substance that helps the body return to normal levels. For instance, if cortisol is too high, ashwagandha lowers it. If cortisol is too low, ashwagandha raises it. Ashwagandha is a tonic for fatigue and exhaustion, memory loss, muscle weakness, and other symptoms of adrenal fatigue. One of the best in the world for anti-aging and wellness support.

Ashwagandha an invigorating herb, that  has traditionally been prescribed to help people strengthen their immune system after an illness. Also used to enhance sexual potency for both men and women, it has rejuvenating properties. Medical researchers have been studying ashwagandha with great interest and as of this date have carried out 216 studies of its healing benefits, summarized below:

Siberian ginseng is known as the ‘King of Herbs’ and prized worldwide. It is a stimulant with tonic benefits, improves mental alertness, is an anti-stress and anti-ageing herb that normalises blood pressure. It’s also an anti-diabetic herb that improves sexual function and symptoms of change of life for men. It has also been found beneficial for women during menapause. That is some herb!

Famed as an energy tonic in China since ancient times, Siberian ginseng only gained recognition in the West in the 1950s. Siberian ginseng contains remarkable compounds that favorably affect the adrenal glands to better endure physical strain, resist disease, and perform tests of mental sharpness. Siberian ginseng is good for both men and women, the main benefits being increased resistance to stress, normalized metabolism, and regulation of neurotransmitters. Siberian ginseng is also an anti-depressant that helps improve sleep, diminishes lethargy, lessens irritability, and induces a feeling of well-being.

When looking at traditional Chinese medicine, the key to optimal wellbeing and good health is maintaining the balance between yin and yang: the two opposing forces in your body. But what happens when the yin is unbalanced? If you are lucky enough to know about rehmannia (a wild herb also known as Chinese foxglove), you may never need to know.

Even now, it’s commonly used to treat conditions believed to be caused by yin deficiency, including a whole host of health complications. According to heakthline these conditions include: allergies, anemia, cancer, constipation, diabetes, fever, eczema, high blood pressure, bacterial and fungal infections, rheumatoid arthritis, osteoarthritis, insomnia, and pain relief. Another of the traditional uses in traditional Chinese medicine for Rehmannia glutinosa has been in the area of tinnitus and hearing loss. Rehmannia glutinosa is also said to be good for your liver and kidneys and for replenishing your body fluid.  The plant also is said to have efficacy in the scavenging of free radicals in vitro.

When it comes to western medicine and the study of individual Chinese herbs, most research is still in very early stages. However, one 2013 study found that catalpol, a chemical in rehmannia, might be able to prevent cell death caused by neurodegenerative disorders.

Lycium barbarum or the Wolfberry fruit is more commonly known today as Goji berries. The goji berry is native to Asia, and people in Asia have been using this brightly coloured fruit for more than 2,000 years as a medicinal herb and food supplement. Goji berries are widely available for purchase however medicinally the forms are best selected for their higher medicinal properties.

Lycium barbarum is excellent for the liver and kidney. It also helps with dizziness caused by malfunctioning of the kidneys, and even with impotence and diabetics. Wolf-berry is a very highly regarded nutritional herb in China. A breakthrough in longevity and immunity. It contains 18 ammino acids, 21 trace minerals, more protein than bee pollen, more vitamin C than oranges and more betacarotene than carrots.

The seven key possible benefits of Wolfberry with scientific evidence supporting them are:

“As an Acupuncturist I have looked into the above ingredients with great interest, as I came across the Savvy team’s recommendation of a replica of an ancient formula that contained all of them. First I helped myself back to good health and then many other people, including people who have had operations, people who are weak, women giving birth to a child who have lost a lot of blood or who wish to have longevity, and good health.”K. L., Acupuncturist