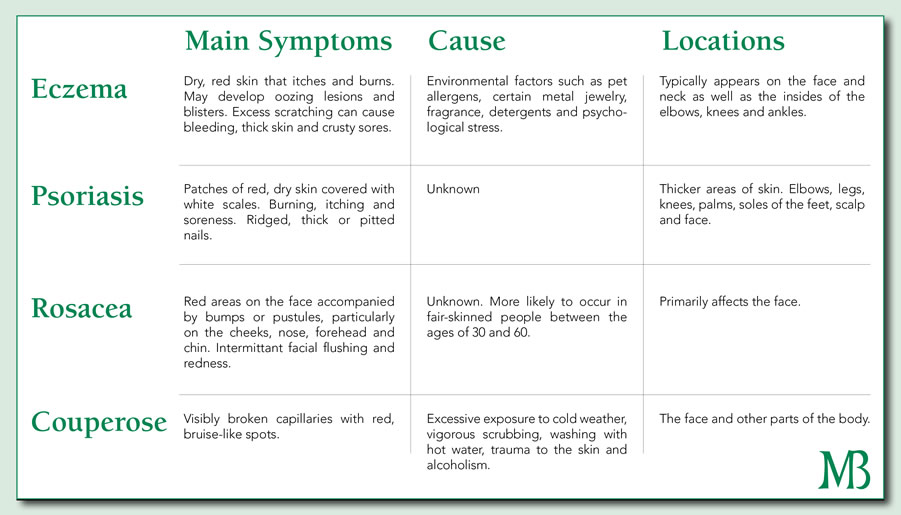 A rash by any other name is still a rash. The terms “eczema” or “dermatitis” are very broad and can mean a whole family of skin conditions, ranging from dandruff, to contact dermatitis to atopic dermatitis. This can lead to many a confused client and skin care professional.

Eczema, along with asthma and allergies, are on the rise; and eczema is much more common today than it was 30 years ago, especially in children. This rapid spike in apparent incidence is cause for concern, and may be due to many factors, such as inadequate diet, pollution and other environmental stressors.

As the 2012 WHO report states, chemicals can enter the bodies of humans via ingestion, inhalation and skin uptake, and children have higher exposure because of their hand-to-mouth activities and the fact that chemical tend to settle onto the floor, as well as their size in relation to toxin exposure. They now admit that the chemicals in many common products used in the home are the most likely cause of a variety of common and chronic health issues, even endocrine disruption.

Eczema and psoriasis are some of the most challenging skin conditions encountered by skin care professionals. Often, there will simply be a little red rash on the skin and you may be left scratching your own head trying to figure out how it came to be. Up to 20% of the world’s children suffer from eczema (1), (2) and up to 3% of adults suffer from either eczema or psoriasis. (3) Given that the world population just reached the 7 billion mark, that’s a lot of people.

It is significant to note that neither “eczema” or “dermatitis” is contagious, nor are they infections (although eczema can get infected); and they aren’t transmitted by external contact or exposure. The origins of eczema and psoriasis were thought to be possibly genetic – which means the tendency to a weakness in this area is enhanced over generations. The WHO research shows that the speed with which the increases in disease incidence have occurred in recent decades rules out genetic factors as the plausible explanation. (4)

It’s since been identified that the triggers that cause these distressing and visible symptoms most likely include diet, stress and environmental (particularly in the home) factors. If you would like to read some Savvy Team members stories of how they eliminated things such as eczema, psoriasis, itchy scalp, dermatitis, hay fever, and dandruff, as well as had unexpected (and needed) weight-loss, and improved immunity – just by changing to the Savvy Teams recommended brands (and you are a registered member of the Savvy Team), click this link.

Eczema and Psoriasis are easily confused because they share a defining characteristic, the inflammation of the skin. If you want to know simple solutions to total elimination of this problem, contact your Savvy Support person or email us at [email protected] and for pictures of these issues go here.

What are the significant differences between Psoriasis and Eczema?

Eczema (Atopic Dermatitis) is a chronic skin condition characterized by red, dry, cracked and itchy skin. In addition to hot, red skin, those with Eczema may also develop crusty sores, thick skin and pimple-like eruptions. The skin may crust over and ooze, or it may become so dry and cracked that bleeding occurs. Most people with Eczema develop the problem during childhood.

Eczema sufferers experience extremely dry, itchy and flaky skin, but this skin condition can also cause eczema pimple-like bumps that may ooze. These fluid-filled bumps do not occur in Psoriasis. In fact, a major difference between psoriasis and eczema is that Psoriasis is never moist; instead, it produces scaly, white or silver patches of dead skin that continually shed.

Eczema usually begins during childhood (roughly 80% of cases of eczema begin before the age of 5) whereas Psoriasis typically originates in adulthood.

Psoriasis appears as red, itchy, scaly patches of dry skin. There are a variety of forms of Psoriasis, the most prevalent of which is Plaque Psoriasis. The slightly elevated, red patches of skin associated with Psoriasis are known as plaques. These often start out as small bumps which worsen and may later be covered in white scales. Skin scaling (when these white scales begin to slough off) is common.

Psoriasis is often linked to genetics; this condition is caused or exacerbated by internalhealth issues (there is a link between Psoriasis and Diabetes, for example). Eczema, on the other hand, flares up in response to external factors, including animal dander, food allergies,  or exposure to harsh cleaning chemicals. As well, nutritional deficiencies have also been shown as a possible ’cause’.

Psoriasis prefers tougher skin (such as that on the knees and elbows) while Eczema favors sensitive areas like the backs of knees and the inside of elbows.

Rosacea is an inflammation of the skin that is marked by redness, dilated blood vessels and—in some cases—papules and pustules. Those with Rosacea might experience a red nose, red cheeks or blushing. Rosacea may be accompanied by a burning, stinging sensation that is similar to sunburn. The skin may simply feel warm.

Rosacea Vs. Psoriasis: When there are symptoms of Psoriasis on the face, it can sometimes be mistaken for Rosacea. Although both conditions are characterized by redness and inflammation, Psoriasis will produce scaly patches of dry, silver skin while Rosacea will appear more as redness, flushing and—in some cases—acne-like eruptions.

Rosacea Vs Eczema: There are times when Rosacea may seem similar to Eczema. However, while Eczema produces sores or blisters that may ‘weep’ a clear fluid, Rosacea sufferers are more likely to experience papules or pus-filled pustules. This is the main difference between Eczema and Rosacea.

Like Eczema, Rosacea often responds to environmental stressors (allergens, spicy food) but it is also caused by internal factors (as is Psoriasis).

For more information on dealing with these issues, which are often caused by factors in the home, please contact us.