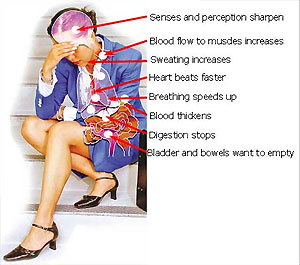 Adrenal fatigue, also known as hypoadrenia, is a dysfunction of the adrenal glands ultimately resulting in diminished production of adrenal hormones which adversely affects your whole physiology. The syndrome is a group of signs and symptoms which people experience when their adrenal glands are exhausted or overworked and become depleted to the point that they are unable to produce adequate supplies of hormones, in particular cortisol.

A stimulated sympathetic nervous system also results with a decrease in production of digestive juices and gut motility which cause digestive and gut problems which are very common in the western world. As a result of decreased adrenal function people with adrenal fatigue frequently also suffer from hypoglycaemia (low blood sugar levels), allergies, arthritic pain and low immune response. Women with it also have hormonal imbalances such as increased menstrual problems, PMS and menopausal symptoms.

Caused by stress … whether it be emotional, mental or physical stress or injury … some of its more obvious symptoms include feeling panicked, exhausted, shivering, low blood pressure, craving salt and dehydration. Any disregard of oneself can manifest as “poisons” in your physiology that could have a physical affect on your adrenal glands.

The lack of optimal adrenal performance is most often associated with the effects of long term stress on the endocrine system of the human body. We have all experienced post- ‘fight-or-flight’ exhaustion. But for those with adrenal fatigue, that shaky, nervous, thirsty feeling lasts for much longer. While stress is a part of everyday life, excessive amounts of stress across a range of areas including home, work life and relationships and can impact on physical and psychological health, and especially have been linked to impaired adrenal functioning.

Cortisol has been called the “stress hormone”, because it’s what our body produces to get us out of danger and quickly to safety. It’s what we call on when we get a surge of adrenaline and when you’re not calling on it too often, things are fine.  But if you’re existing in a permanent state of extreme stress – through physical or emotional trauma, financial strain, workaholism or marriage breakdown – and perhaps supplementing with way too many cups of coffee, you could be getting your body ready for a breakdown. Or to use a common term, burnout.

2. Insomnia: According to the United States Department of Health and Human Services in 2007, approximately 64 million Americans regularly suffered from insomnia (which adds additional stress to your adrenals) each year and insomnia was 1.4 times more common in women than in men. It seems women are more prone to stress, exhaustion and insomnia which can lead to overloaded adrenals as we struggle to keep up in todays busy world.

5. Negative Emotions: Research to date demonstrates a strong relationship between stress, wellbeing and psychological and physical health and functioning. A Harvard University study in 2006 showed that stress and negative emotions are part of the cause of at least 85% of illnesses.

The Australian Psychological Society commissioned a survey in 2011 of the stress and wellbeing of Australians, to provide insight into the psychological health of the Australian population. Following are their findings.

A story of recovery:

A friend of mine, a bodybuilder went on her own search for diagnosis when she experienced adrenal fatigue a few years ago. After a heavy schedule of training and starting up a business, burnout crept up on her until she was soon spending three days each fortnight bedridden. Being health conscious, she knew it wasn’t a diet-related condition and she listened to her body’s need to nap.

“It was different to feeling tired – my head was extremely fuzzy and I could barely keep my eyes open,” she told me. “I would crave ridiculous amounts of salt.” I introduced her to our Savvy philosophy of regaining or maintaining health: increasing nutrition, reducing toxins and opening the detox pathways being the first steps. Then after doing this, by supporting her body and balancing her hormones: (which included some of these natural remedies) and making sure she got to bed before 10:30 at night, she quickly began feel better. This did not mean she was out of the woods, as the body takes time to heal, but after several weeks she was already feeling better, and after a few months could not believe how much better she felt.

We would like to give you the same simple solutions that you can easily incorporate into your busy lifestyle, that will help you cope with todays stressors, so make sure yo contact your Savvy support person for more information.