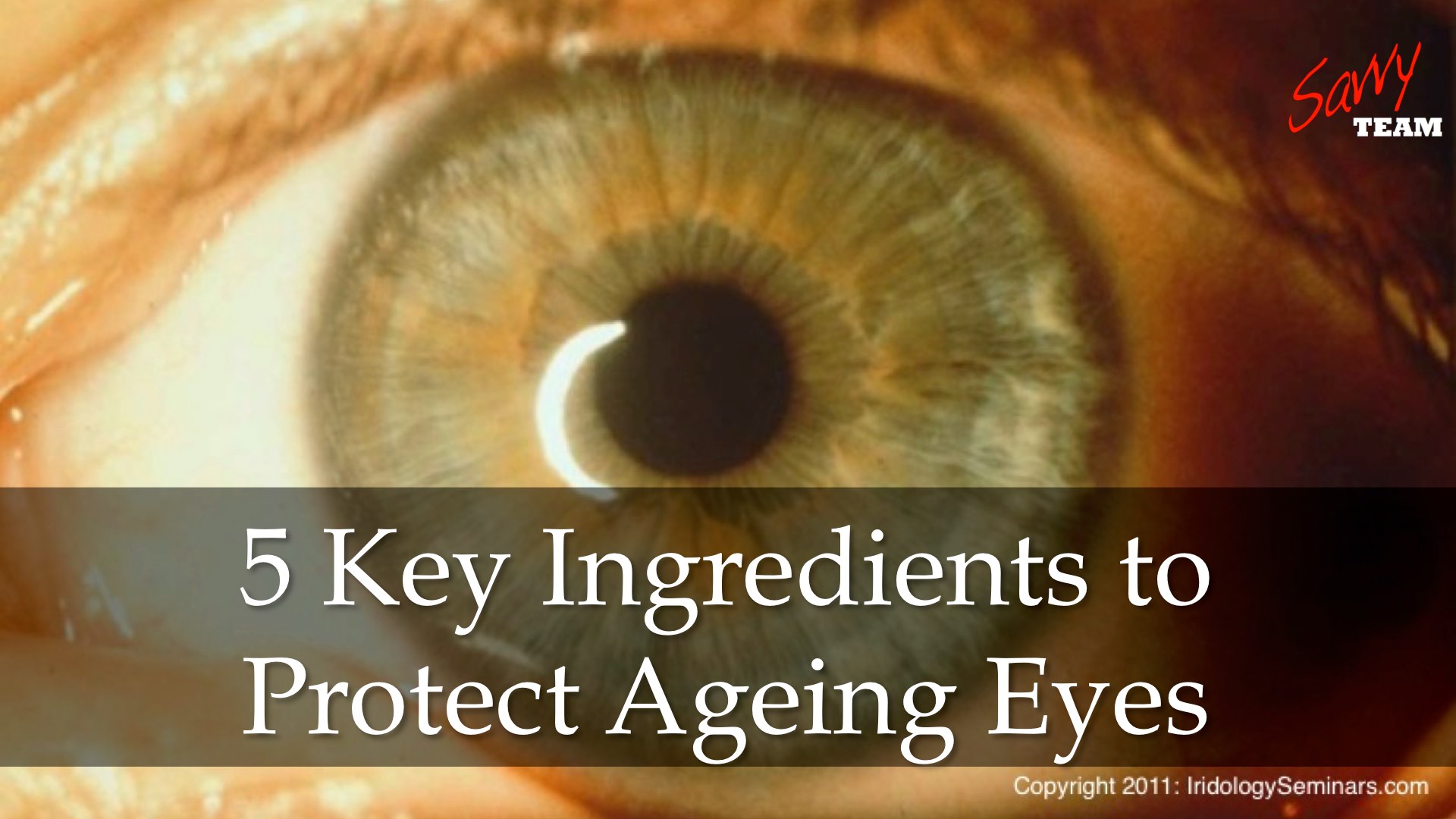 As founders of the Savvy Team, we have had a long and intimate association with Eyes!

Working as Wellness Instructors and Iris Photographers since the early 1990’s, we’ve used the principles of Iridology to help thousands of people overcome issues using nutritional supplements. Many of these issues they had been previously told – were irreversible.

However, protecting or even improving eyesight has more to do with the delicate internal function of the eyes, rather than the outer colour and patterns we look for in the practice of Iridology!

The eyes are complex organs, with many parts that must work together to produce clear vision. The most common nutrients in eye health supplements are various forms of antioxidants. Antioxidants can help slow the progression of vision loss, especially from oxidative stress. The damaging effects of oxidative stress and toxin exposure – is implicated in most eye problems, as it is in most age-related diseases and in the ageing process itself.

The eyes need even more nutritional support today than ever before. For instance, research shows that between 50% and 90% of people who work at a computer screen have at least some symptoms of eye strain. People who look at computer screens frequently, (and who doesn’t these days!) may experience symptoms such as:

If this sounds familiar, it might be time to begin taking precautionary care of your eyes!

Today we all have at least one and often many other digital devices with glowing screens. Most work on one throughout the day and this work gets harder as you age because the lenses in your eyes become less flexible.Somewhere around age 40, your ability to focus on near and far objects will start to go away. It’s now known that supplements containing combinations of nutrients such as vitamin C, vitamin E, beta carotene, zinc, and natural ingredients like bilberry and lutein are now well known to be hugely beneficial for many eye sight issues, including glaucoma, macular degeneration, granular dystrophy and almost any other degenerative eye condition.

Somewhere around age 40, your ability to focus on near and far objects starts to decline. It’s now known that supplements containing combinations of nutrients such as vitamin C, vitamin E, beta carotene, zinc, and natural ingredients like bilberry and lutein are now well known to be hugely beneficial for many eye sight issues, including glaucoma, macular degeneration, granular dystrophy and almost any other degenerative eye condition.

When a large study called the Age-Related Eye Disease Study, or AREDS, proved what new research had already suggested – that things like antioxidants and other good nutrition may improve eye health and even help prevent cataracts. AREDS found that people at high risk for advanced AMD lowered their risk of the disease by about 25 percent when treated with a high-dose combination of bilberry, vitamin C, vitamin E, beta carotene, and zinc.

In another large, long-term study of more than 3,000 adults (ages 43 to 86) in Wisconsin, the five-year risk for cataracts was 60 percent lower among people who reported using multivitamins or any supplement containing vitamin E or vitamin C for more than 10 years, compared with nonusers.

Bilberry’s modern reputation as a healing plant was sparked during World War II when British Royal Air Force (RAF) pilots noticed that their night vision was sharper than usual whenever they ate bilberry preserves before starting out on their evening bombing raids. Subsequent research revealed that bilberries are powerful antioxidants, capable of protecting cells in the eye and other parts of the body against damage from unstable oxygen molecules called free radicals.

Carotenoids have begun to attain a certain level of fame for having helpful protective properties for the eyes, and one well-known one is Lutein.

Minerals can help your body use antioxidants: Important minerals for your eyes include zinc and selenium.

Ask your Savvy Team Wellness Guide about the amazing formulation we recommend in the Savvy Team and for a $10 discount coupon to get you started with your first order.  Or contact us at via FacebookThank you for reading this post and please feel free to ask questions or add comments.

Have questions? Want to know what we suggest as Eye health supplement? Reach out to your Savvy Team Wellness Guide, message us on Facebook or use our contact page.